Ceasefire in Gaza after a deadly escalation with Israel

Calm returned on Monday in the Gaza Strip following a ceasefire announced by the Palestinians. 690 rockets had been fired since Saturday. 23 civilians and combatants died in two days.

Calm returned on Monday in Gaza in favor of a cease-fire announced by the Palestinians after the worst outbreak of violence with Israel for many year s , but without any long-term settlement in sight.

Palestinians agreed to a ceasefire that came into effect before daybreak, at the start of Ramadan , three Palestinian and Egyptian officials said on condition of anonymity. No confirmation has been obtained from the Israeli side, which generally refrains from corroborating such truces.

But after two days of an escalation that killed 23 civilians and fighters in the Gaza Strip and four civilians in Israel, the rocket fire of the blockaded Palestinian enclave and the Israeli retaliation actually stopped at the time of the ceasefire. – fire indicated by officials, reported an AFP journalist in Gaza.

Removal of all restrictions imposed on populations

In a sign of lull, the Israeli army announced the lifting of all restrictions imposed on Israeli civilian populations near Gaza. It did not provide more details, but these measures usually include school closures or public assembly limits.

The Egyptian neighbor, a traditional intermediary in Gaza, forged a cessation of hostilities agreement that came into force at 4:30 am (3:30 am French time), said on condition of anonymity a leader of the Islamist Hamas movement in power in Gaza and another leader of Islamic Jihad, the second largest force in the Palestinian enclave and another arch-enemy of Israel.

An Egyptian official confirmed the conclusion of an agreement. The Palestinian enclave and neighboring Israeli cities have been the scene for two days of the most severe outbreak of violence since the 2014 Gaza war , raising fears of a new conflict.

This bout of fever also coincided with a strong warning from the United States to Iran, accused by Israel of supporting armed groups in the Palestinian enclave under a strict Israeli blockade for more than 10 years . The agreement found in the night, like precedents concluded after multiple episodes of violence, aims at a relief of the blockade imposed by Israel, said the head of the Islamic jihad.

It provides for measures as to the extent of Israel’s authorized Gaza Sea fishing areas, as well as an improvement in the supply of electricity and fuel, which are of prime concern in the narrow enclave of two million inhabitants. experienced by wars, poverty and seclusion, he said. 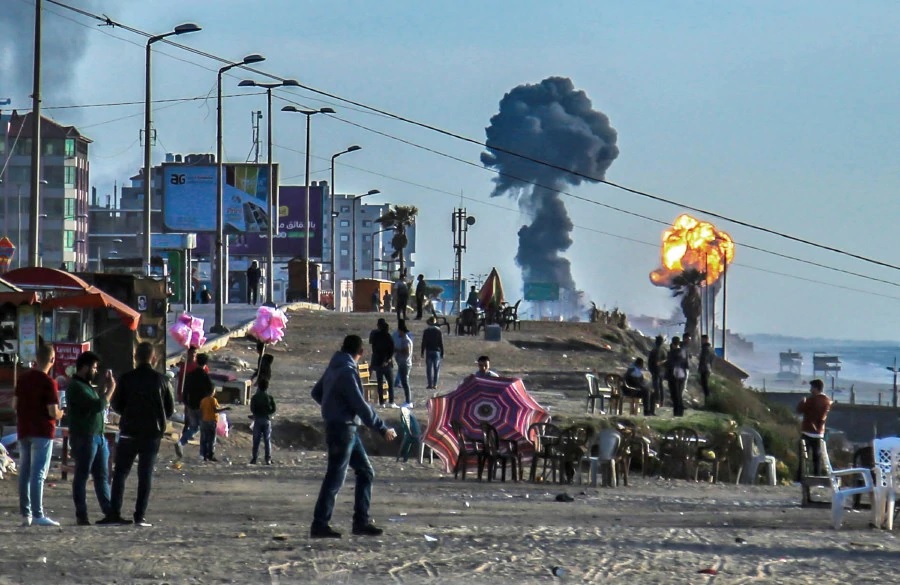 Some 690 rockets have been fired since Saturday from Gaza, of which more than 500 have reached Israeli territory, and at least 35 have fallen into urban areas, according to a count of the Israeli army.

Israeli civilians killed over the weekend are the first to die under Palestinian rockets since the 2014 war, according to at least two Israeli officials. Extremely rare, one of them was killed when a Kornet-type anti-tank missile fired from the Gaza Strip reached vehicle, according to the Israeli army.

“We support Israel 100%,” tweeted Trump
Two pregnant Palestinian women and two babies are also among the dead , according to information from the Hamas-based Gaza Health Ministry.

“We support Israel 100% in the defense of its citizens,” tweeted Sunday evening US President Donald Trump.

Once again, Israel faces a barrage of deadly rocket attacks by terrorist groups Hamas and Islamic Jihad. We support Israel 100% in its defense of its citizens….

Shortly thereafter, White House National Security Adviser John Bolton announced the deployment of the “USS Abraham Lincoln Aircraft Carrier and Carrier Group and a Bomber Force” in the Middle East without establishing a direct relationship with the USSR. escalation in Gaza but warns Iran against undermining the interests of the United States and its allies.

Post Views: 530
0Shares
Previous article8 Amazing Facts About Tekashi 6ix9ine
Next articleHere Is Everything You Want To Know About The Crown Season 3

Weather agency of the U.N said on Tuesday that...