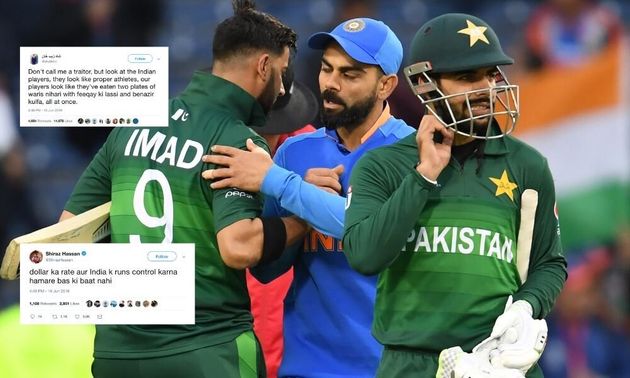 India Wins The Match With Pakistan; But Pakistan Wins On Twitter

Cricket is not a game for Indian fans. It is an emotion that flows through every time our Men in Blue marks their presence on field. The game is no doubt invented by England, however, its popularity is off charts when it comes to the Asian continent and specifically India. Indians share a different bond with cricket and their enthusiasm for Team India is something never seen anywhere in the whole world.

However, there are a number of other Asian countries with their cricket teams, but they haven’t received the recognition and support the way India does. While Bangladesh and Sri Lanka are doing decent in this sport, Pakistan is witnessing a significant decrease in their gameplay. Once considered a mighty squad, Pakistan has now become the most trolled cricket team. Recently in a cricket World Cup battle between India and Pakistan, India tasted victory, as usual. However, this loss wasn’t taken in a good note by the Pakistani fans and they bursted out on Twitter. Even though most of the tweets were sarcastic and targeted the way Pakistani cricket team plays, it clearly shows how fed up Pakistani cricket fans are.

Indian Cricket Team set a huge target of 336 runs for the Pakistani batsmen to chase. However, the game slipped away from Pakistan during the early stages of second innings. The moment their fans realized there is no hope for them in this match and also their own captain Sarfaraz yawning in the middle of the game, they started flooding Twitter with memes and on point tweets that really kept the humour on the world of tweets going.

Here are some of the popular and trending jokes Pakistanis made about their defeat.

Don't call me a traitor, but look at the Indian players, they look like proper athletes, our players look like they've eaten two plates of waris nihari with feeqay ki lassi and benazir kulfa, all at once.

India, on the other hand, has got a strong position in this World Cup with this win. The team continues to perform well and is also thought to be the strongest contenders of lifting the ICC World Cup 2019.

Published in Cricket and Sports News