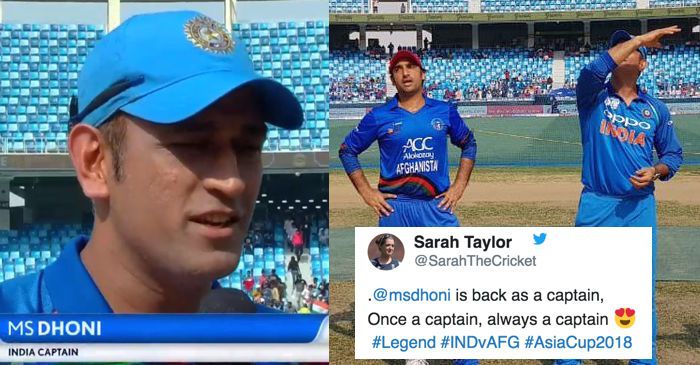 Once a Captain, Always a Captain: #MSD

Mahendra Singh Dhoni justifies the statement, Once a Captain, Always a Captain. MS Dhoni the former Indian Cricket Team Captain, will always remain a captain for the team India.

Virat Kohli once said, “Dhoni will always remain my captain”. Dhoni will be the leader for the Indian Cricket Team. The bond between Virat and Dhoni has become stronger with the passing time.

Recently, The Men in Blue after defeating team Bangladesh won Asia Cup 2018 trophy, Dhoniwalked to Rohit Sharma, who led the Indian Cricket team in Asia Cup 2018 and asked him to give Khaleel Ahmed a chance to hold the trophy. Khaleel Ahmed is the youngest member of the squad.

Dhoni’s decision of making the newest team member hold the trophy won many hearts. The young player was speechless when Dhoni and Rohit asked him to hold the trophy.

It was Khaleel’s debut series and it was a memorable experience for him.

Mahendra Singh Dhoni had always been the best and he stands out of the crowd. His cool attitude on the field made him the coolest captain. He holds the record for scoring fifth fastest 10000 runs in ODI and the first batsmen to enter the 10K runs club with 50+ average.

Dhoni’s batting has been criticized by cricketing experts. As per Agarkar, the World Cup 2019 Schedule is already out and there is not much time left for Dhoni to regain his form, and the management has to take a bold decision.

During the 2011 World Cup, the final match between India vs Sri Lanka, Dhoni’s six at the last ball is one of the epic shot that leads India to win the World Cup. This time now in 2019 World Cup, Dhoni’s fans are excited to see him in 2019 World Cup as this may be the last match before 37-year-old player retirement.