With a maximum sustained winds reaching 75 mph, the tropical storm Barry was upgraded to a Category 1 hurricane. On Saturday morning, the storm reached an inch closer to the Louisiana coast and that is when the decision was taken.

National Weather Service warned the people that as of 11 AM, the storm is moving northwest towards Morgan City, LA. The storm is bringing with it, a dangerous surge and heavy winds in the region.

Brandon Noriega, a meteorologist said on Saturday, “With the majority of the thunderstorms and rain on the southern side of the storm, and still offshore, the heaviest rain will still be moving onshore the rest of today and tomorrow”. He further added that that flooding is not over if people are thinking so, especially across Louisiana.

Brandon said previously that inland across the Mississippi River Valley, forecasters are expecting to see flooding and rain as an aftereffect for some days after the storm settles. He also speculated that isolated tornadoes are also possible across the region on the coming Sunday. The mighty hurricane Barry is expected to make landfall near Marsh Island before hitting the mainland. 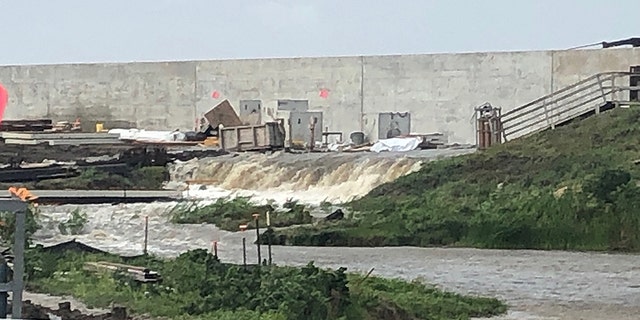 There is a reason why this storm is upgraded to Category 1 hurricane. This powerful entity is expected to affect around 3 million people in Louisiana and few parts of Mississippi causing most of the damage in these areas. A few of the parishes around Morgan City reported the customers without electricity supply during the day time on Saturday. More than 50,000 people have lost power in southern Louisiana and few of the roads were even submerged underwater.

However, the US Coast Guard rescued around 12 people trapped after the flood water cut off their access near the coastal community of Isle de Jean Charles. The rain that hit New Orleans overnight was on and off again. As the sun came up, the streets of French Quarter tourist district were empty and damp. The weather was breezy and no one was seen on the streets.

One of the person, Wayne Wilkimson, walking out with a dog said that “So far it’s been really nice. It’s been cool. It’s been a little breezy”. He welcomed the pre-storm after the July’s normal heat. Baton Rouge which was the area devastated by the floods in 2016 was quiet on Saturday with water puddles left from rain that happened overnight.

In response to a video of Barry storm, FEMA chief said that “It’s powerful. It’s strengthening. And water is going to be a big issue”. This was warned by the National Hurricane Center Director Ken Graham. In 2005, the hurricane Katrina caused damages that were beyond calculations and it was blamed for more than 1,800 deaths in Louisiana and some other states.

The US President Donald Trump has already declared a state of emergency in Louisiana. He also authorized federal disaster relief efforts, and around 10,000 people staying in Plaquemines Parish were ordered to be evacuated on Thursday.

Because of its low elevation, New Orleans is very vulnerable to flooding and only about half of the city is above sea level. This is a significant drop from the 100 percent it was once used to be, according to the Atlantic. The sky over the Lake Pontchartrain on Lakeshore Drive is quite cloudy with a little flooding as reported  you several news agencies.

The governor of Louisiana John Bel Edwards warned that this storm impacts and coupled with the already high Mississippi River. The river has been already overflowed by heavy rain and snowmelt this spring. This, along with the storm Barry, could be a deadly combination.

Post Views: 784
0Shares
Previous articleThings To do in Williamsburg VA with Family
Next articleDecorated Green Beret Killed in Afghanistan Remembered as ‘Beloved Warrior’

Two London men have been arrested on mortal trafficking...

COVID-19: Japan asks US military to stay on base amid pandemic

Japanese Foreign Minister Yoshimasa Hayashi on Thursday asked that the...