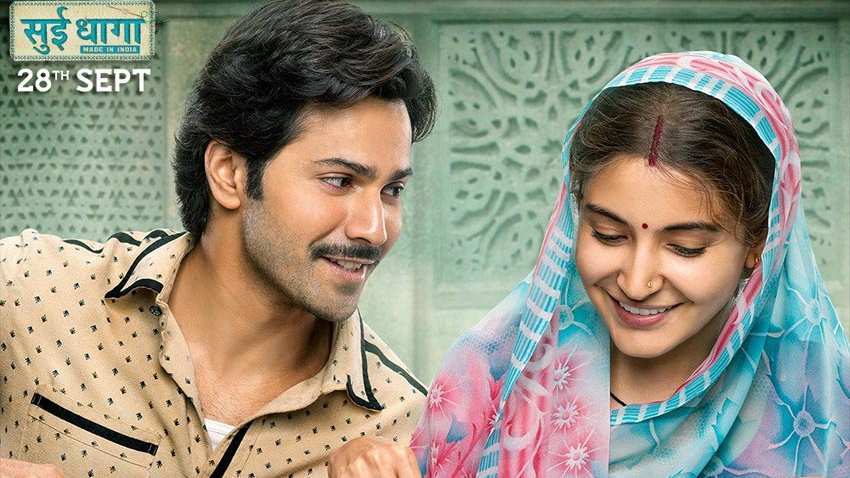 Varun Dhawan and Anushka Sharma’s Sui Dhaga (Sui Dhaaga) released in the UAE on Thursday, September 27, a day prior to its India release.

The movie brings the concept of ‘Make in India’ in focus. It tells the story of an ordinary man who does extraordinary things that are both inspiring and heartwarming. The trailer of Sui Dhaga also managed to floor the viewers with its desi feel and honest performances.

The movie is getting a good response from the critics and they have termed the Sharat Katariya directorial as a wholesome entertainer.

Sui Dhaga will be released across 2,500 screens in India and 700 screens overseas (Worldwide screens: 3,200). According to early estimates, the movie is expected to collect Rs 8-9 crore on the opening day at the box office.

Check out what critics have to say about Sui Dhaga.

The Indian Express: “Sui Dhaaga is well made. It’s nice and safe and staid. There are several moments that warm the heart, and you cheer when sui-dhaaga win over needle-and-thread. But you always knew they were going to, didn’t you?”

The Times Of India: “Director Sharat Katariya does take a few cinematic liberties, but there are enough real moments to move you. In a winning first half, he successfully establishes his main characters and their problems. Smart usage of humour in dialogues ups the entertainment quotient, even when the going gets tough for the characters. Film’s songs and background score lend gravitas to the story. While the narrative doesn’t get too preachy or predictable, the second half is simply convenient. Also, while Mauji’s struggle for self-employment finds ample mention, there isn’t much to justify his excellence in the craft, except his failed legacy.”

Hindustan Times: “Katariya’s films have interesting, nuanced asides and routinely good dialogues, but despite all that this film doggedly refuses to get interesting. The background score balloons in orchestral style when things are sad, and becomes merrily desi whenever things on screen should be celebrated. Lyricist Varun Grover writes some simply evocative lines, though I found it interesting that this proudly make-in-India film chose Anu Malik, a composer known for making knock-offs of better, more established products and defiantly appropriating them.

Sui Dhaaga is a feel-good film about dignity of labour, and the honest toil of a hard-working tailor. Too bad it feels machine-made.”

The Hindu: “Ultimately Sui Dhaaga pans out like Lagaan—a rag tag team hits a sixer on the fashion ramp; the hoi polloi earn the approval of the gentry. It is a tad flat in comparison to the more layered quirkiness of his previous outing, Dum Laga Ke Haisha, but you still care and root for Katariya’s characters and can’t help appreciate the fact that the agent provocateur in this film, as in DLKH, continues to be a woman. To borrow a line from the film itself, despite many hiccups, sab badhiya hai (all is well).”

India Today: “Varun Dhawan and Anushka Sharma both keep their stardom aside and step into the world of Mauji and Mamta. Even though there are moments where you feel Varun Dhawan’s boyishly handsome looks overshadowing the rustic Mauji, or Anushka’s sunburnt face not fitting in with Mamta, the film gives its leads enough opportunities to shine.

Sui Dhaaga ends on a hopeful note. It urges the ‘mad ones’ to dream and go the whole hog to fulfil their dreams. Because, “A bit of madness is key / To give us new colours to see / Who knows where it will lead us? / And that’s why they need us.”

NDTV: “Sui Dhaaga falls well short of perfection, but it never comes unstuck. It passes muster as a wholesome entertainer embellished with humour, warmth, authentic emotional trappings and actors adept at going seamlessly along with the flow. Definitely worth the price of the ticket, if not more.”

News18: “Varun Dhawan surprises with his willingness to take risks. Who would have thought he could play a docile character with such ease? He weaves his suits and charm with equal finesse. Anushka Sharma holds her own and never lets anyone snatch her spotlight.

At 122 minutes, Sui Dhaaga is endearing for sure.”

The National: “Some may argue the film is too simple, but that’s what makes it beautiful. Heart-warming and sweet, you can forgive Sui Dhaaga for weaving in a little extra drama in its fabric.

There is nothing extraordinary about the story. You know everything will work out in the end, but Sharat Katariya makes the journey interesting. The director tackles troubled family dynamics, corruption and red tapism that is rife in India, and makes a case for local artisans, who are often taken for a ride by bigger fashion designers, or are lost in the fabric of society and are forced to take up menial jobs to make ends meet.”

Gulf News: “Sui Dhaaga is a wholesome entertainer which demands that you don’t over-analyse it by pulling at its weak threads. It has its sparkling moments — mainly due to the performances of the actors and the nuggets of humour that are thrown in. So why not pin your hopes on Sui Dhaaga?”

Khaleej Times: “Director Sharat Kataria brings similar authenticity to ‘Sui Dhaaga’ like Dum Laga Ke Haisha. With his writing, he crafts his characters with care and gives us a story that is heartwarming.

Varun Dhawan is known to be a director’s actor and Sharath gives him to play with. Anushka Sharma shines as the innocent Indian wife, who covers her head with a ghoonghat and yet has the final word in the family. She naturally gets out of her comfort zone and we are glad she chose to be Mamta.

Despite its minor flaws the movie is an engaging watch.”