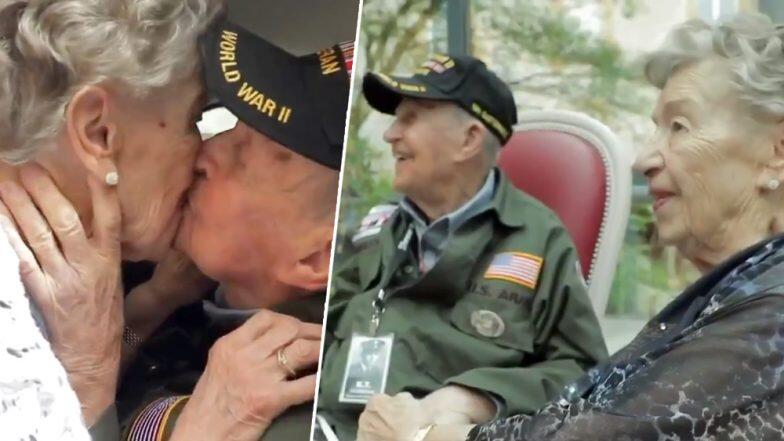 A reunion recently broke the bars of all the love stories you have probably heard of. A 97-year old World War II veteran get to meet the lady he met back when the World War was still on.

In 1944, a United States soldier named KT Robbins was stationed in France. During the time he was stationed in France, 24-years old Robbins met 18-year old Jeannine Pierson and it was love at first sight. However, Robbins had to leave Pierson when he had to leave France and go to the Eastern Front for fighting. He later returned to the United States and hence never get to meet Pierson again.

Both Robbins and Pierson didn’t lose the spark they had developed for each other during the course. The spark that stood ignited for more than seven decades. Pierson, in an interview with EuroNews, said that she cried the day Robbins left in the truck, and she wished he had not returned to America after the war. Robbins, however, kept Pierson’s photo with him, with zero hopes of seeing her again.

His wish finally marked a happy ending when he shot a segment for the France 2 TV network. The show was about American veterans returning back to the country for the events commemorating D-Day’s 75th anniversary. During the filming, Robbins mentioned Pierson and put forward his desire to meet her and her family and tell them how much she meant to him. During all this, Robbins was not aware if Pierson is alive or not.

When KT Robbins got to France, the reporter had a special surprise waiting for him. He had brought Pierson for marking a happy meeting between the two who separated seven decades ago. The couple had a heart-touching meeting before Robbins had to leave for the D-Day event. However, Robbins said that it was temporary and that he will definitely see her again.