Narendra Modi has yet again proven to be the best leader according to the people of India. As the results of Elections 2019 dropped today, BJP-NDA alliance is in a clear and powerful position to claim a one-sided and easy victory, letting the Indian National Congress struggle to even reach double digits. Winning more than 300 seats yet again is no joke. The elections of 2019 were in hot trends ever since it started and even though people were not fully satisfied with the last tenure of Modi Government, the results show that a majority of them still support the Vikas Modi has promised over the years.

With a vision of making India powerful, and sensitive issues like Nationalism and National Security, BJP tried to grab the attention of the people. However, the party was criticized for bringing in these sensitive matters, but the results show that not many people see these issues as delicate. For them, the only thing matters is what good Modi government has done in the last five years, including increasing India’s presence all over the world, improving worldwide relations, strengthening the Make in India vision, and a lot more. 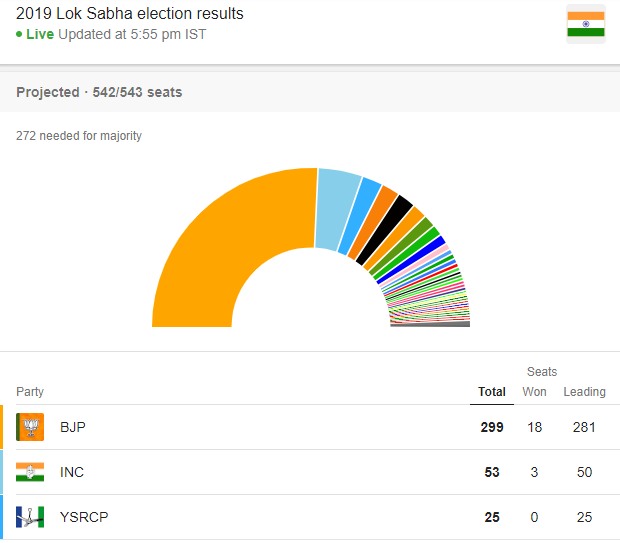 The important opposition alliance Indian National Congress didn’t seem to even give a proper competition to the BJP, as the party is seemingly collapsing without even getting a double digit seats. Their leader, Rahul Gandhi, just couldn’t seem to impress the people of India and it has reflected in the results today. 67.11 percent of the total 90.99 percent of voters casted their vote in these elections, and the results are, needless to say, terrific for the BJP.

Don’t know what Congress has on their sleeves for next but one thing that’s for sure, is we have a strong PM for the next five years.

Previous article
Brexit : Theresa May says She Ready for a New Referendum
Next article
Elections 2019 – BJP Registers A Colossal Win While Congress Struggles To Survive